THE EFFECTS OF GENETIC TESTING: CONSTRUCTIVE OR DESTRUCTIVE?

By Gerold S Bell DMV, Tufts Cummings School of Veterinary Medicine  (this article originally appeared in the June 2001 issue of the AKC Gazette)

Every breed has genetic disorders.   Finding tests that identify carriers of the genes that cause these disorders is a goal in all breeds. Once a genetic test is found, however, it is a double edged sword: its use can enable breeders to improve a breed or devastate it.  Without genetic tests, the number of dogs that can be identified as carriers is low, even though many dogs may be suspected of being carriers because they have relatives that are known to be affected.

Without tests, though, genetic-disease control involves breeding higher-risk dogs to lower-risk dogs.  Dog breeds have closed gene pools; in other words, the diversity of genes in a given breed is fixed.  The number of dogs removed from consideration from breeding based on concerns regarding a specific genetic disease is usually low, and therefore does not greatly alter the breed's gene pool, or diversity.

However, once a genetic test is developed that allows breeders to positively determine if a dog is a carrier of a defective gene, many owners are likely to remove carrier dogs from their breeding stock.  Although doing so is human nature, this temptation must be overcome.  Any quality dog that you would have bred if it had tested normal should still be bred from if it tests as a carrier.   In such circumstances, carriers should be bred to normal-testing dogs.   This ensures that affected offspring will not be produced.  Carrier breeding stock should be subsequently replaced with normal testing offspring that exceeds it in quality.  If the only quality offspring is also a carrier, then use that offspring to replace your original carrier.   You have improved the quality of your breeding stock, even though the defective gene remains in this generation.  It is certainly true, though, that the health of the breed does depend on diminishing the carrier frequency and not increasing it.  You should therefore limit the number of carrier-testing offspring that you place in breeding homes.  This does not mean, however, that you should prevent all of them from being bred.  It is important to carry on lines.   A genetic test that should be used to help maintain breed diversity should not result in limiting it.

CONSIDER ALL ASPECTS
We know that most dogs carry some unfavourable recessive genes.  The more genetic tests that are developed, the greater the chance there is of identifying an undesirable gene in your dog.  Remember, however, that your dog is not a single gene, an eye, a hip or a heart.  Your dog carries tens of thousands of genes, and each dog is part of the breed's gene pool.  When considering a breeding, you must consider all aspects of the dog, such as health issues, conformation, temperment and performance - and weigh the pros and cons.   When a good-quality dog is found to carry a testable defective gene, there is a better option than removing that dog from your breeding program.  That option is to breed it, so that you can keep its good qualities in the gene pool, and then replace it in your program with a normal-testing dog.

There are breeders who contend that no more than 10% of carrier dogs should be removed from breeding in each generation.  Otherwise, they say, the net loss to the gene pool would be too great.  In fact, less than 10% of all dogs in a breed are ever used for breeding.    Dog breeds do not propagate according to what is known as the Hardy-Weinburg equilibrium, where all members of a group reproduce and pass on their genes to the next generation.   Breeders already place tremendous pressure on their gene pools through selective breeding decisions.   Indeed, breeders who focus their selective pressure on the more elusive traits in their dogs, rather than on testable and predictable single-gene conditions, are right to do so.

THE DANGERS
It is important that Breed Clubs educate their owners on how genetic tests should be properly used and interpreted.   History has shown that breeders can be successful in reducing breed wise genetic disease though testing and making informed breeding choices.  You should remember, however, that there are also examples of breeds that have actually experienced more problems as a result of unwarranted culling and restriction of their gene pools.

These problems include:  reducing the incidence of one disease and increasing the incidence of another by repeated use of stud dogs known to be clear of the gene which causes the first condition; creating bottle necks and diminishing diversity by eliminating all carriers of a gene from the pool, instead of breeding and replacing them; and concentrating on the presence or absence of a single gene and not the quality of the whole dog.

Breeders are the custodians of their breed's past and future.   "Above all, do no harm" is a primary oath of all medical professionals.   Genetic tests are powerful tools and their use can cause significant positive or negative changes.  Breeders should be counseled on how to utilize test results for the best interests of the breed.

This article can be reproduced with the permission of the author.    Jerold.Bell@tuft.edu 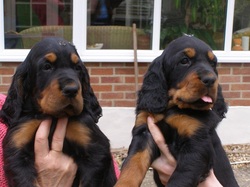 'WHICH PUPS TO KEEP FOR EXHIBITING AND BREEDING'

Once PRA is accepted on to the KC Health Scheme then all dogs used in a breeding programme will have to be tested prior to being mated.   If you breed a clear with a carrier, the offspring will be split; 50% will be clear and 50% carriers.   If you choose to, you can arrange with your vet to have the puppies microchipped from 5 weeks of age and submit dna mouth swab samples to the Animal Health Trust UK.  This will mean that you have to keep the puppies away from their dam for the previous 12 hours, (overnight) would be a good example and have a very early appointment with the vet.     The test results will take maximum of 3 weeks to return from AHT, but can be less than that.   So by the time the puppies are ready to leave home you will know the clear from the carriers.   The initial matings of carrier to clear dogs are going to cause some headaches, but once you have clear to clear matings, life will become less complicated... The main point to bear in mind is not to take the pick of the litters puppies out of the equation because their test returned as a carrier.   The aim is not to breed any more dogs affected with PRA rcd4, that is achievable now.

AN IMPORTANT FACT TO STRESS TO PET BUYERS IS THAT A CARRIER IS JUST THAT, AND WILL NEVER BECOME BLIND WITH PRA rcd4.